The circus and sideshow geeks may have disappeared but P. T. Barnum would have no trouble recognizing this freak show.

Did social media just bring the inbreeds and weirdos to the surface or is it actually creating them and making people perform strange and bizarre acts with a Canadian goose and a Swiffer so they can post it and garner their few moments of electronic attention? 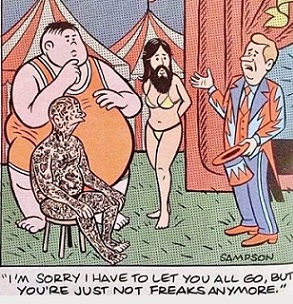 The first challenge I heard of was the Ice Bucket Challenge as a way to raise money for ALS research but things have gone way beyond that, past ridiculous self-abuse and stupid human tricks right on into suicidal. Eating or drinking challenges like eating a tablespoon of cinnamon, an entire raw onion, hot peppers, a teaspoon of wasabi, etc. were popular for a minute before being pushed aside in favor of gross human stupidity. Eating Tide pods, snorting condoms, the fire challenge, the choking game, the Kiki challenge and the recent Bird Box challenge all seem designed to improve the gene pool as the world watches. Unfortunately, most of these internitwits will go on to reproduce. Chuck Darwin would be horrified.

Then there are those special little trinkets that must be pretty weird to begin with who feel they must take their light out into the world via social media. You know the kind of people I mean, the ones who create intricate copies of Renaissance artwork using their own bodily substances, the lady who collects hair – not her own, other people's hair, the gentleman who enjoys sex with four-wheel-drive trucks – with them not in them, or the grandmother who collects and makes jewelry from her grandchildren's lost teeth – at least, I hope they're her grandchildren's and that she waited until they lost them. These people post endless pictures of their obsession and pop up on innocent searches or as your new neighbor down the hall in apartment 3B. Um, yeah, excuse me, I have to go check the deadbolt.

And who can forget the freaks who commit crimes specifically for social media or think that a lurid status report is a laudable achievement? These are some real winners.

So what are we to make of all this? Frankly, I'm not sure. I've always regarded the internet as a tool and, for the most part, that's what I've used it for. I seldom post status reports, I've never taken a selfie and there aren't more than two or three photos of me on the internet. On Facebook, I post articles – and discuss them in the comments-, the occasional announcement of an event and memes, lots and lots of memes. I like memes; the sicker the better and I've been incarcerated in the Zuckerberg Memorial Penitentiary for Wayward Memesters numerous times. Of course, smartassed, sarcastic and insulting memes are my particular drug of choice – I am a DV after all. But I've never engaged in the pathetic, desperate sharing of every picayune detail of my life and I don't have an equally pathetic and pathological interest in the lives of others, be they so-called celebrities or even family members. Especially not family members. Cue the banjo music.

The sickos and the pervs have always been out there but now they've got an audience to play to and there have always been people who slow down to gawk at car accidents but the opportunity to do so was limited to their communities and the evening news. Social media has opened a mutually satisfying conduit for the narcissist and the voyeur and I'm not talking about PornHub, which we all know performs a valuable service. No, beyond fapping and bean flicking, there's a combination of obsessive narcissism and breathless anticipation of the next human train wreck to appear on our screens.

Now that we've fed the monster, it's become voracious and has begun growing it's own food. Perhaps that will improve the human breed.

Article written by: DV VetChick; She might be a hippie but she kicks ass and gets mushy with doggies!

The Military Dependent Uniform (MDU) made a big splash in the military community, in 2019. Several hundred dependent spouses were hand picked to don identifying lanyards and t-shirts this year, in an effort to clearly...

No two (or three) dogs will train the same, as quickly, or even to do the same tasks in spite of having the same handler...

“If you can afford the parts, we’ll fix your car for free!”

Everyday we tout “do unto others as you would them do unto you” yet, we are hypocrites in the sense that we will say all should help one another but when we’re asked to help there’s always an issue. Whether we’re “too busy” or “no money” or some other....

Any and all articles, images, videos and otherwise are works of said author unless otherwise noted.

Any and all credit is given to any third-party sources with a link(s) to its original content when necessary.external internet sites.