Is this sports? Is it politics? Is it random thoughts coming to me as I laugh my mother-fuckin’ ass off watching people implode 4 days later? I will call it sports because I will eventually meander into that.

So, I dropped this post in the middle of the night. It was a joke. I expected a few people to not find any reference to Redneck Jesus in any light other than divine reverence as an assault to their sensibilities, but damn if I thought the page would go into full melt down and the subsequent memes generated by the DV s on the page. (This is one of my favorites posted by Jamie B. on Jan. 11th) Well, I couldn’t be more wrong. Most people laughed, but damn if there wasn’t some real rancor over it.

For those who don’t know, Dale Earnhardt is a NASCAR legend. He had an impressive record with:

On February 18, 2001, on the last lap of the Daytona 500, he was bumped, did a right hand turn on a race that only turns left, went almost directly head on into the outer wall and was killed almost instantly. I was watching the race when it happened. As a matter of fact, I was stationed in Everett, Washington, saw the crash, saw Michael Waltrip take the checkered flag, shrugged in disappointment because Earnhardt didn’t pull off the move and take the win. Turned off the TV, packed my wife and kids into the mini-van and headed out on that Sunday morning to do what we had planned. I mean it was Dale Freakin’ Earnhardt. He had walked away from far worse wrecks than that. When we got back home the sports channels and news stations were all on continuous feed of his death I was in shock. I mean it was Dale “the Intimidator” Earnhardt, he couldn’t die. Yet he did.

Now, 18 years later, after we have spent the better part of 5 years making fun of EVERY celebrity’s death, sometimes before the body is in the meat wagon, I posted a meme that had a reference to the political debate over a boarder wall and him “saying” walls work. Wow was I a fool. I mean, it had a horrible impact. Almost 11,000 people liked it, ~350 loved it, over 11,000 laughed at it, with a total negative impact of about 2,000 and a little under 5,000 being shocked. I ain’t good at math, but for the 500 of the people who got angry, damn if you aren’t a sensitive bunch. The same bunch that will wear shirts that say, “I don’t give a fuck.” Now they care about you knowing they don’t care. There is no value in not caring if people don’t know you don’t care. You have to care about people knowing that you don’t. And when there is actually something that is in their rice bowl, EVERYONE ELSE needs to care 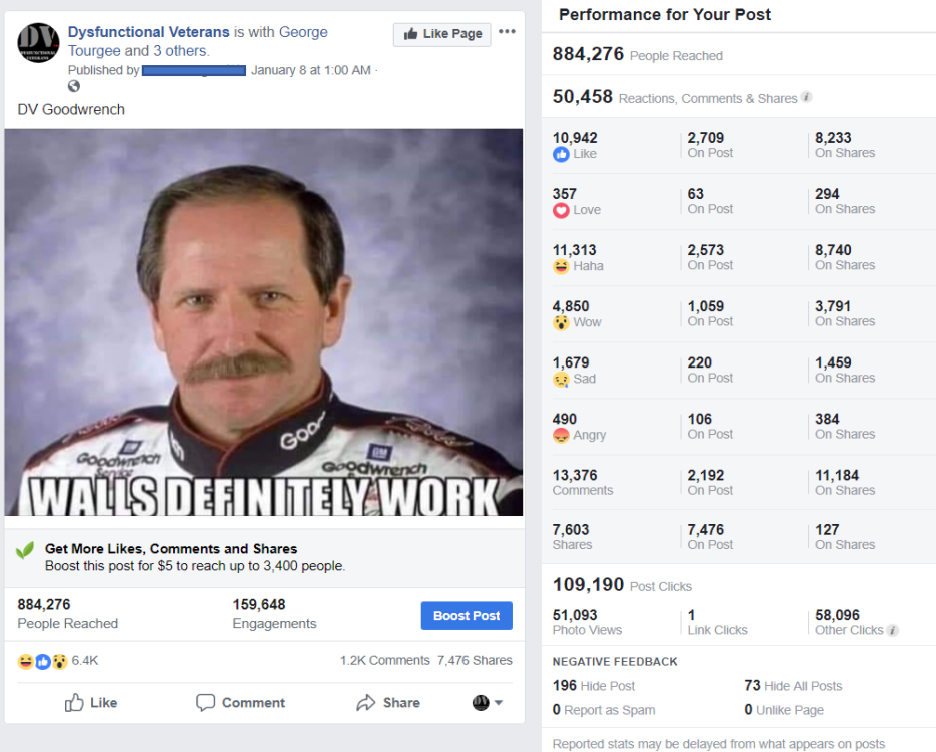 because they care. Newsflash. I really don’t care if this meme pissed you off. I am not saying I am not reacting. I am laughing my ass off. I was a huge fan of Dale Earnhardt and I was legitimately saddened by the death of a man I never even met. That said, I have had to put the deaths of GREAT MEN I knew and served with into their place in history. I have had to come to terms with the loss of people I knew and loved. A man who revolutionized personal publicity (he really did start the whole marketing of the individual… check it out it’s an interesting subject – and No I am not going to feed you a link, look it up), who drove a car, sometimes very fast, sometimes just fast enough, and sometimes not very well… I miss the idea of watching Dale Earnhardt, but I can’t miss him. I didn’t know him.

So, why would Tinman watch a bunch of cars driving in an oval making a left-hand turn for hours? Well, the thrill of “can my guy win it” is in there. “What great move was made” is in there. One of the biggest draws, and it has been studied and isn’t just me, is the wrecks. How bad was the wreck? Did my guy get caught up in the wreck? Did he squeak through? How many times and angles will they replay the wreck? Always wanting the wreck and always expecting that the safety innovations will keep the drivers safe.

Maybe I did make it sports, maybe I didn’t… Don’t care. Go Fuck Yourself.