On April 15, 2019, one of the world's most known cathedrals brightened the early morning sky but this wasn't a happy brightness. No. For many, it was history being taken away in the blink of an eye while others mourned over a staple that had changed many lives. From Hollywood to religion, Notre-Dame Cathedral has played a huge part throughout history.

Whether you're of religious faith or not, you probably were shocked to hear and see something so massive and beautiful come to a burning demise Monday when you flipped on the news, scrolled through your social media, or had someone at work asking, "Did you hear that Quasimodo burned Notre-Dame?!" All joking aside, many thought that was the absolute end to a massive and prestigious structure. Cue Ubisoft and it's amazing world-renown team that is behind such triple-A video games as: Far Cry, Watch Dogs, Tom Clancy's Rainbow Six Siege, Prince of Persia: Forgotten Sands, and the entire Assassin's Creed series.

Ubisoft is a French video game publisher headquartered in Montreull. Its massive and global team is comprised of some of the hardest working, every ethnicity and religion possible minds and people. From young to old, these are the people you made fun of in school and probably still do. "Those geeks are never going to get laid." to "Look at what the nerds are up to. Staying at home on a Friday night, being anti-social. What are they going to accomplish in life?" It's funny isn't it? The once looked down upon are now those you turn to in a time of need. Don't believe me? Who do you think made that medicine you take for a flu? Or perhaps that prosthetic limb that was blown off or you were born without? How about the computer or mobile device you're using to read this right now? None of that would be possible without the geeks and nerds that didn't go out and get drunk every weekend while you slipped through the cracks in school. 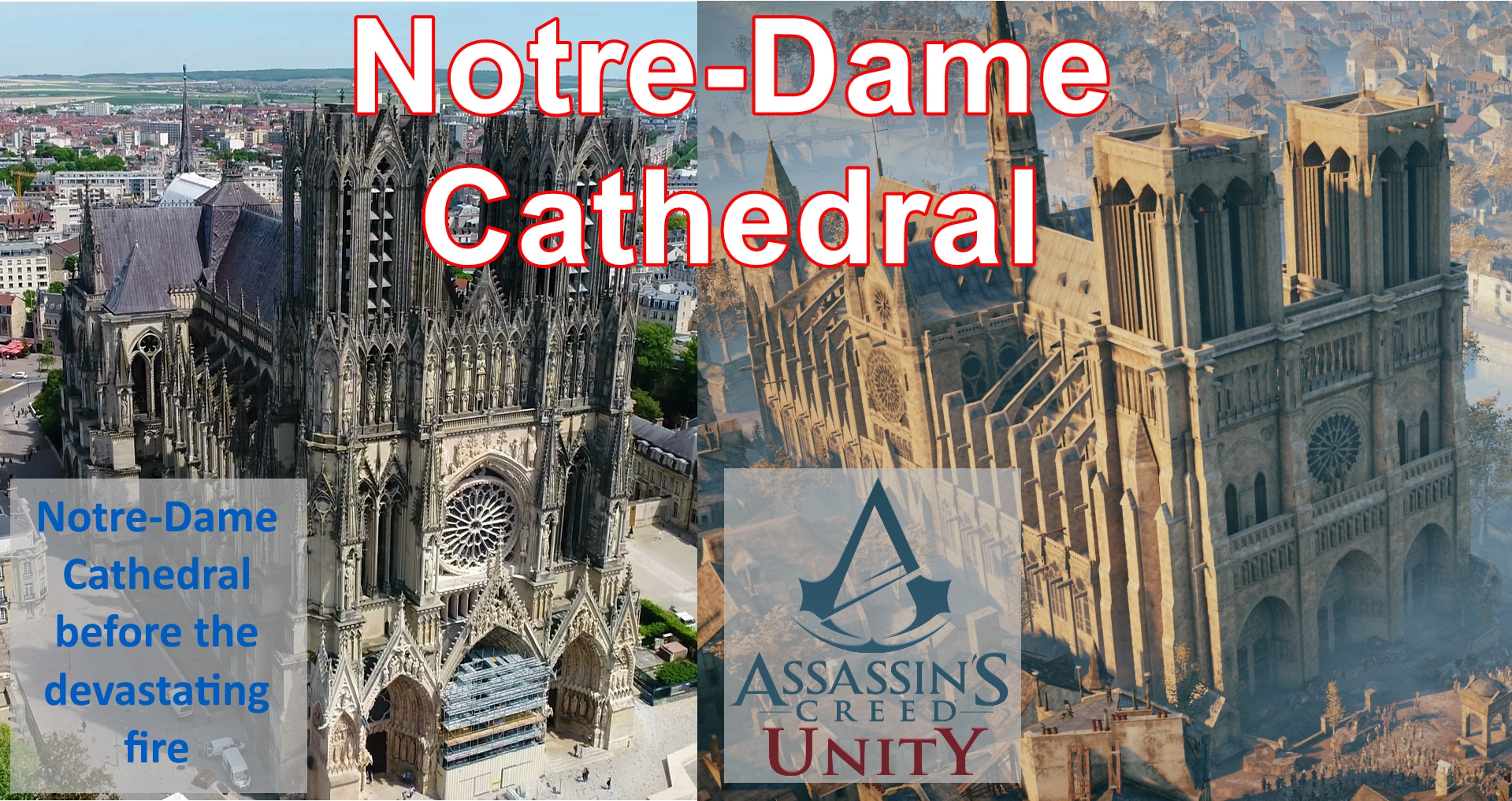 Believe it or not, these folks done extensive research and on-the-site photography as well as video capture to build the cities you see in the Assassin's Creed series [respectfully]. From the interiors to the massive undertakings around each landscape and building, it was rebuilt inside of a virtual game. More or less, the cities are as close to scale as you can get without taking five years to go down the block to the old clothes dye vendor. Ubisoft has done something no one once perceived as possible. They have actual structural data to be able to rebuild and recreate, from scratch if needed, the entire Notre-Dame Cathedral. "Oh, cool. They can build a building. Why not just look at photographs from back-in-the-day? Dumb-asses." I know, that's what everyone is thinking.

Truthfully, it isn't as simple as you may think to recreate a building of that quality, that old, and with that much TLC from a few photographs taken over the years. Moreover, how would you know exactly where something went inside that structure to be able to hold this block or that window? You wouldn't know. Not even the greatest minds would be able to know unless they spent YEARS and a ton of money researching all of this. This is where Assassin's Creed Unity steps in. From the outside to the inside, every bit of the Notre-Dame Cathedral was recreated, INSIDE OF A VIDEO GAME!! [If you're wondering how long it took for them to recreate this structure in-game, research took around two years by Caroline Miousse to make as close as an accurate depiction as possible.]

When you build a video game, you're not just throwing up some pictures and making them do what you code them, you're [literally] making humans, animals, and static objects from essentially nothing. Inside yourself there's a skeleton layered with muscles, tendons and various other parts that allow you to walk, move, jump, react, etc. The same goes for a video game. They build a skeleton, add the layers then add the final product that YOU observe when you push forward on the controller or "W" on the keyboard. This is also true for a building, trees, vehicles and all other environmental add-ons. Without any of that, you would basically be looking at pictures that look all sick and pixilated. Or, just think of a souped up Atari 2500. [Yes, I played and still own one. Shut the hell up and mind yo' own!]

Sitting here thinking about this isn't easy to wrap my brain around and I actually understand game development. The technology that we've grown over the last thirty years was once thought impossible. Even in Hollywood, they still make the impossible possible but with a video game, with it being able to possibly rebuild an entire city? No one in their right mind would have even thought this imaginable. Not even by TODAY'S standards!!

Something else that caught me is the fact that Ubisoft is donating €500,000 [roughly $564,930 USD at the time of this publication] to help with the restoration and reconstruction of the Cathedral. So, they're not only lending Paris their resources in order to rebuild the Cathedral, they're donating money to help to do it all! It doesn't seem like a lot of money, but the fact that they're doing this without being asked, it's a heartwarming and touching thought in all honesty.

With all of that said, you can also find a link to grab Assassin's Creed Unity for PC free down below. What else can technology honestly do for us? Is there an end to it all? Will there ever be a day that something that even technology cannot touch? Many say technology is playing god. However, doesn't almost every religion say something about a deity giving knowledge and resources to doctors in order to help its fellow man? [I don't remember the bible passage, but I know it says something about that, something along those lines. There's over 3,000 religions, I can't keep them all straight anymore.]

What's something you'd like to see technology do that would actually help us all? Something that isn't "Back to the Future" or "Star Wars" science mockery? And I'm talking about things beyond flying cars and x-ray vision glasses. Things like the 3D printed heart from actual human DNA that recently was achieved. [Yes, we've entered the realm of Star Trek and that could change the medical industry dramatically.]

NOTE: At the time of this publication, it had not been fully confirmed whether or not Paris would actually use Assassin's Creed resources to rebuild Notre-Dame Cathedral nor had it been publicly mentioned either had reached out to the other.

Get your copy of Assassin' Creed Unity on PC by clicking the link below or via the Uplay store before April 25th!